It has been an amazing round learning about percentages and angles. I love learning percentages since I was in grade 4 because in my perspective, it is easy to understand and a very handy way of writing fractions. Percentage can be compared more easily than fractions, and it is short and easy to remember because the number of percentages are mostly used from 1 to 100, so you don’t have to remember a lot of numbers. Percentages are also useful in the way that we use to look at the increasing and decreasing. For an example: if we want to look at how many people have died due to the traffic accident between 2016 and 2017, the only way that is easy for us to know is looking at the percentage. If it says “From 2016 and 2017, the number of people that died due to the traffic accident has increased by 10%”, so by looking at that percentage, we know that it does not decrease that much. Percentages are now over and heads up to Angles.

Learning angles is a little hard for me because I am not really good at it, but I told myself that “you are going to be an Angles master one day”. I know that I am not good at it, so I try to work on both the exercises about angles in the book and on Khan Academy. Doing exercises more and more help me a lot with Angles, so now I am pretty good at it. In geometry, an Angle is a place where two lines intersect and the until of an angle is degree. There are many types of angles that we name in mathematics and I will define them below.

This round we’ve been focusing on decimal. I am so happy learning about this topic even though I am not that master at it. The decimal point is the most important part of a Decimal number. I’ve been learning how to multiply, substract, add, and divide the decimals by both whole number and the decimal itself. As long as you pay attention to your teachers while they are explaining, it won’t be hard to do. Sometimes there are lessons that you are good at and there are lessons that you are not good at, but if you just try hard a little bit, everything will be possible I promise. I first found it really hard to divide, substract, add, and multiply the decimals by decimals, but I found it easy after spending ten to twenty minutes every day learning about this lesson and I finally pretty good at it. Now, heads back to the lesson that I learned.

If you multiply any decimal number with 10, the strategy to solve this problem is to just move the point (.) one place to the right. The same thing with 100, the only difference is that, if there are two zeros in the 100 like that, you just have to move the (.) two places to the right. Note: you just have to count the zero and move the decimal point (.) as the number of the zeros.

This is the formula

Dividing decimal is not that different from multiplying decimal. The only thing is that is different is that, if you divide any number (without a decimal point) with 10, you just have to move the point (.) one place to the left. This is the formula that helps me every time I get stuck.

In words, it is pretty hard to explain, but I have the example below that will help you to understand it better. For Example:

The only difference when subtracting decimal with decimal is that, you have to place the decimal point at the same place. For example:

Math may not teach me how to add love or subtract hate, but it gives me hope that every problem has a solution.

As we start a new round, the lesson is also new. This round is a little bit different from the last round. Last round we were focused on Whole Numbers, More Calculation With the Whole Number, Fractions and Multiply and Divide Fractions, but for this round we are mostly focusing on Geometry which are mostly related to the area and perimeter of the polygons like, rectangles and triangles. While we are learning geometry, the code.org is also introduced to our class. Code.org is just something that is related to math that we could learn outside of the class. To add on that, Khan Academy is my favorite website to learn math because it has a very good sound when we finish the lesson. It also provides us some videos that teach about the lesson we are doing when we are stuck at some point or we don’t know what the lesson is about.  It is a really great website to learn math. On the last unit of the book, we learned about ratio. A ratio says how much of one thing there is compared to another thing. We need to make sure that the number is in a simplest form as we would do with fraction (The simplest form must be in a whole number). For example, the ratio of men to women is six to three, so we would write it as 6:3. We call the “:” as “to”. Finally, because this number can be simplified, so it would be 2:1 or two to one. To make sure we understand the content well, we did a lot of fun projects and games relating to recipes, budgeting, shirt colors and number of staffs and students in school. We also did some word problems related to ratio to make a clear understanding of what it is and to know how to do both exercises and word problems. To me, word problems are a little bit difficult from a normal exercise, but I found out that word problems are really useful because they help me both with the math and the words usage with math. I found this lesson really fascinating and more exhilarating for a new math book, 5B.

This term, I have learned a lot about the Whole Numbers, More Calculation With the Whole Number, Fractions and Multiply and Divide Fractions. These are the topic that I like to do the most. When I have free time, I always work on it and spend some time learning some new vocabulary in English that is related to Math.  I have made a poster about inspiring people to study hard by a quote called “Make the most of your learning”. The picture below is the art that me and my partner made. All of this art is all representing studying, quotes about life and the benefits of trying hard. The figure below is a poster that I did. 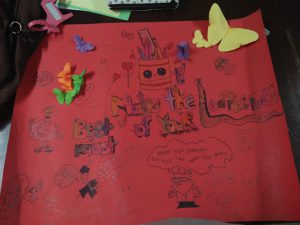 Liger Leadership Academy students are English Language Learners. They have been immersed in English since arriving at Liger, We pride ourselves on prioritizing process over product. Please excuse any English errors as part of the learning continuum our students have taken over the years.

My name is Ena Im. I am thirteen years old. I study at the Liger Leadership Academy school. I was born in Tboung Khmum province in Cambodia. I currently live and learn at Liger Leadership Academy, a scholarship-based educational institution for promising youth. My free time is often devoted to reading. When I got stress or when people made me feel bad, I always run to my bed and read the Holy Bible. Sometimes I did that and sometimes I read some inspiring quotes that I have written in my private book.

I am passionate at designing and inventing something new that will help my country to be better and peaceful. I will change people mind from thinking that “Girls cannot do anything to make the country develop or better” to think of “Girl can change her country or even the world to be better and peaceable”.

The biggest dream of my whole life is to be successful and I will use my happiness to define my success.